Aluminium anodizing is sensitive and reactive to DC voltage wave shape and other process parameters. Proper devices are indispensable to reduce costs and times and to increase quality. CAEV produces rectifiers and electronic devices specifically designed for aluminium anodizing. 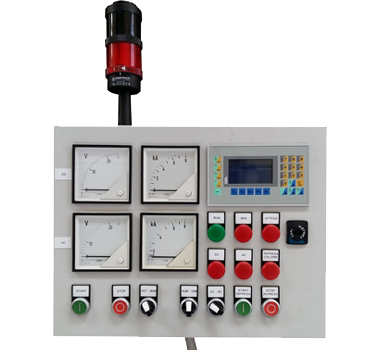 The Ramp Programmer manages and supervises the rectifier working cycle, made up of programmable ramps and different voltage/current levels.
Cycles can be easily programmed and memorized.

The Programmer can modulate either current or voltage in order to obtain a pulsing DC wave.
Base value, pulse amplitude and duty cycle can be set.

The Oxide Thickness Programmer is an instrument that, being based on the rectifier supplied voltage and current and bath temperature, calculates the oxide microns as they form.
Before starting it is possible to set the micron value and the current density.
When the process starts the Programmer calculates the total current needed and controls the rectifier output in order to stabilize the current density.
Besides, it calculates the micron value and when the oxide thickness has reached the set value an alarm is activated.

For aluminum electrocoluring processes CAEV design and produces different lines of suppliers, including more traditional technologies as well as advanced and experimental solutions.

This supplier is an AC/AC sinusoidal single-phase supplier. Voltage regulation is obtained by means of a motorized voltage regulator in order to guarantee a perfect sinusoidal voltage wave. By means of manual devices in remote control box the operator can set the full working cycle, including the soak time and current peak. “Hold voltage” facility for color check.

A power supplier able to supply DC voltage and AC sinusoidal single-phase voltage (with both symmetric and asymmetric half-waves), that allows to obtain different colors (from steel color to black) over controlled time spans. The entire Six step cycle, from soak step to cycle end, is managed by a PLC on board. Different programs can be set and memorized. Asymmetric half-waves facility allows to lengthen and shorten color (light and dark) formation time in order to obtain easy color repetition.